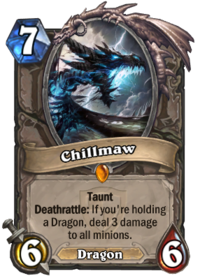 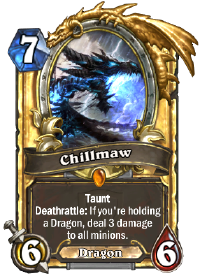 Taunt
Deathrattle: If you're holding a Dragon, deal 3 damage to all minions.

Chillmaw keeps trying to ruin the Grand Tournament, and she would've done it too, if it weren't for those dang kids!

Chillmaw is a legendary neutral minion card, from the Grand Tournament set.

Chillmaw can be obtained through The Grand Tournament card packs, or through crafting.

A good card for playing mind games with your opponent, as they will have to guess whether or not you have a Dragon in your hand, and whether they want to risk killing Chillmaw without first Silencing or transforming it.

Some decks that rely on N'Zoth, the Corruptor as a win condition use this card as a defensive play, without using any other Dragons in the deck. This is acceptable, as there are few effective neutral Taunt Deathrattle minions.

A deck that includes Chillmaw, N'Zoth and Deathwing, Dragonlord can be absolutely devastating; Deathwing can summon Chillmaw for free from the hand upon its death, or Chillmaw can benefit from having Deathwing in the hand to trigger its effect (these of course work in tandem with any other Dragons in a deck). After their deaths, playing N'Zoth will revive both at once, which can be a game-ender.

Chillmaw is a level 82 elite frost wyrm circling northeast of Ironwall Rampart, south of the Shadow Vault, north of the Valley of Fallen Heroes. Riding Chillmaw are three elite Cultist Bombardiers who spawn shortly after Chillmaw is aggroed.