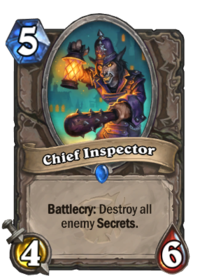 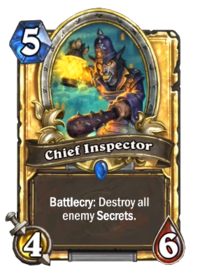 Empty your pockets, I know you’ve got a Wandering Monster in there!

Chief Inspector is a rare neutral minion card, from the The Witchwood set.

Chief Inspector can be obtained through The Witchwood card packs, or through crafting.

This is a tech card that allows you to remove Secrets against Mage, Paladin, Hunter, and Rogue decks that are running secrets.

Compared to its predecessor Eater of Secrets, it's less effective when dealing with many Secrets at once, but has reasonable base stats, making it more flexible and less of a dead card when playing against decks that do not run Secrets at all, but on the other hand it costs 1 more mana. Additionally, it's an odd-cost card elegible for Baku the Mooneater decks. It fares better than Kezan Mystic and SI:7 Infiltrator if the opponent has multiple Secrets up.