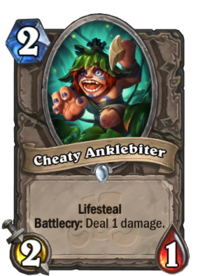 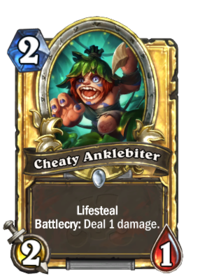 Famed hunter of the deadly Achilliosaur.

Cheaty Anklebiter is a common neutral minion card, from the Rastakhan's Rumble set.

This minion shares the effects of Elven Archer and Swamp Leech into one body. While unimpressive on its own, Cheaty Anklebiter can give you cheap, minor Health restoration and has the flexibility of an offensive effect and a defensive keyword.

Summon
Is that food? I need it!
Attack
Food!