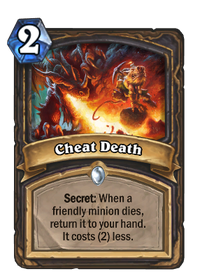 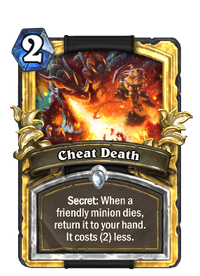 Secret: When a friendly minion dies, return it to your hand. It costs (2) less.

Cheat Death is a common rogue spell card, from the Kobolds and Catacombs set.

Cheat Death can be obtained through Kobolds & Catacombs card packs, or through crafting.

Cheat Death joins Rogue's wide arsenal of Return to hand mechanics, giving another version of Shadowstep as a secret.

This card works with minions with powerful effects that you want to use repeatedly, such as Prince Keleseth or Aya Blackpaw, or for synergy with The Caverns Below. Unfortunately, the lack of diversity in the Rogue secret pool means that as of Kobolds and Catacombs, there is no reason for your opponent not to kill a poor minion before your target one. The best way to guarantee that you successfully activate this card on your target is to only have that target on the battlefield, which isn't that good because it means you only have one minion on the battlefield.