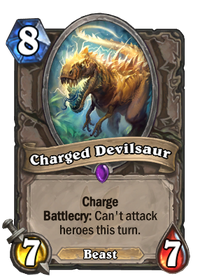 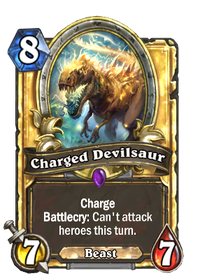 What happens when a dinosaur mixes soda and pop rocks.

Charged Devilsaur is an epic neutral minion card, from the Journey to Un'Goro set.

Charged Devilsaur can be obtained through Journey to Un'Goro card packs, or through crafting.

Example: Free From Amber Discovers and summons this minion. The summoning player can immediately order it to attack the enemy hero (assuming no other attack restrictions such as Taunt).

This minion, while understatted, comes with Charge, allowing it to trade with a minion as soon as it's played. When played directly, it basically works as a big Rush minion, although the lack of additional effects leaves it wanting.

Because its attack restriction is tied to its Battlecry, if it is summoned through other means, it's effectively a slightly weaker 8-mana King Krush. Ways to work around its Battlecry include being summoned from Free From Amber, resurrection effects like Eternal Servitude and Mass Resurrection, or being summoned directly from the deck, such as with Recruit cards like Silver Vanguard and Kathrena Winterwisp or Darkest Hour.

While underrated by it's effect and Battlecry, this card serves as a strong bait if combined with Desperate Stand, creating a semi Windfury, destroying an enemy minion, ressurecting himself and attacking the enemy Hero.