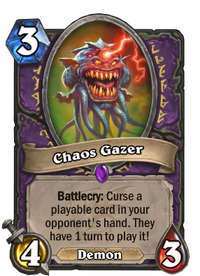 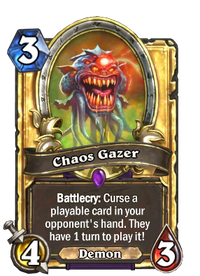 Battlecry: Curse a playable card in your opponent's hand. They have 1 turn to play it!

No matter the game rules, it's always playing Go Fish.

Chaos Gazer is an epic warlock minion card, from the Galakrond's Awakening set.

If your opponent has been holding one card for most of the game, this might be a cue they have a combo piece or key card in their hand. If you specifically want to disrupt a combo, waiting until the late game is the best bet for hitting something important.

Chaos Gazer can also be played before playing Loatheb or Boompistol Bully, potentially targeting a key card in their hand and making it completely unplayable, guaranteeing its removal from the game.

Summon
Choice is an illusion.

Attack
Right into my trap!

Previously: "Battlecry: Corrupt a playable card in your opponent's hand. They have 1 turn to play it!"