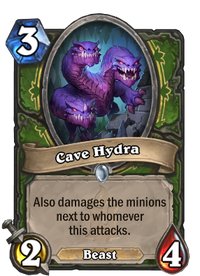 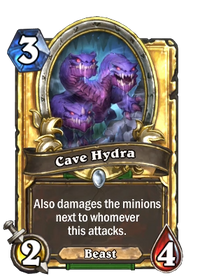 Can be upgraded into a Cave Lurker.

Cave Hydra is a common hunter minion card, from the Kobolds & Catacombs set.

Cave Hydra can be obtained through Kobolds & Catacombs card packs, or through crafting.

However, it fails in this because if your opponent already has multiple minions on board, they will easily kill a 2/4, and if your opponent doesn't, they can play around this through strategic positioning and summoning individual strong targets.

This card works well with others which boost its Attack, such as Houndmaster, Dire Wolf Alpha, and Trogg Beastrager. It has extreme synergy with Crackling Razormaw, as +3 Attack, +1/+1, and Poisonous all can devastate the opponent's board.

Hydras are three-headed amphibious beasts native to both Azeroth and Outland. Historians have long disagreed about whether the immense hydras of Azeroth and Outland share a common ancestor. What is clear, however, is that these ruthless creatures have existed on both realms since ancient times. Each head appears to display a level of independent behavior. The forms of hydras vary somewhat between the two worlds.

Cave Hydra appears to use the appearance of a four-legged hydra from Draenor, rather than the two-legged variety mostly seen on Azeroth.