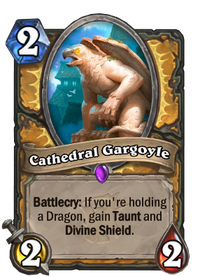 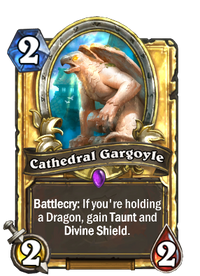 Battlecry: If you're holding a Dragon, gain Taunt and Divine Shield.

Cathedral Gargoyle is an epic paladin minion card, from the The Witchwood set.

Cathedral Gargoyle can be obtained through The Witchwood card packs, or through crafting.

First of all, always remember to have a dragon along him. Summoning Cathedral Gargoyle without a dragon is an always loss effect. His stats are just average and he don't have another Battlecry or secondary effect to contour.

It is obvious but, as you need at least one dragon to activate his Battlecry, Sand Breath can be used right after suffering damage, possible baiting more than one spell from your opponent's hand.

A great card for early trades. A low cost taunt with divine shield is really a pain to dispose. It is most certain that your opponent will spend some cards to destroy it, creating opennings for stronger mid game summons. For an early game deck, you can combine it with Fallen Sun Cleric and Righteous Cause.

Alternative, is an awesome card for late game decks. You can combine it with Wickerflame Burnbristle and Righteous Protector. Their effects are hard to deal with at the same time. You can then use a Rallying Blade or Bolvar, Fireblood afterwards.

Gargoyles are vicious, flying, bat-like creatures that hail from Northrend, are normally found in the service of the Scourge, and have the ability to assume an immobile stone-like form to replenish their health. However, Cathedral Gargoyle does not appear to be one such gargoyle, instead appearing more similar to the real world's gargoyle statues. Specifically, it resembles a gryphon.

Gryphons (aka griffons or griffins) are powerful and highly intelligent winged beasts with the forequarters of an eagle and the hindquarters of a lion. Native to the Aerie Peak and the Hinterlands, they have long shared an inseparable bond with the dwarves of the Wildhammer clan, who later introduced them to the rest of the Alliance.