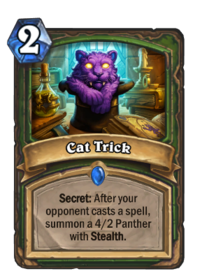 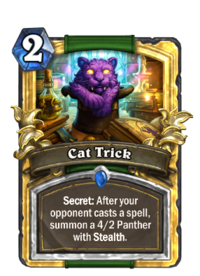 Secret: After your opponent casts a spell, summon a 4/2 Panther with Stealth.

"I know some new tricks, a lot of good tricks. I will show them to you. Medivh will not mind at all if I do."

Cat Trick is a rare hunter spell card, from the One Night in Karazhan set.

Two copies of regular Cat Trick are obtained by completing the hunter Class Challenge in One Night in Karazhan, unlocked upon completing the third wing, The Menagerie.

As a Wild format card, both regular and golden versions of Cat Trick can also be crafted for the following amounts: 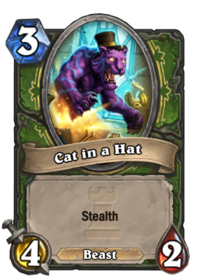 The Cat in a Hat is identical to Jungle Panther, but is put into play for 2 mana instead of 3, making this Secret mana-efficient; Secret synergy like Eaglehorn Bow can improve this further. Most reliable against spell decks.