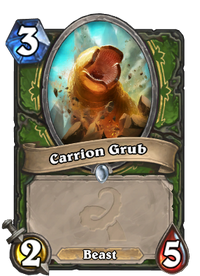 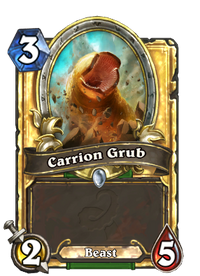 Carrion Grub is a common hunter minion card, from the Whispers of the Old Gods set.

Carrion Grub can be obtained through Whispers of the Old Gods card packs, or through crafting.

This minion has no special abilities, but as a Beast it provides synergy with many hunter cards. It also has reasonable stats for its cost - being a 2/5 it can easily kill other early minions without dying.

It is also conveniently located behind Houndmaster on the mana-curve: Playing Carrion Grub on turn 3 can turn it into 4/7 with Taunt on turn 4.

Carrion grubs (also called carrion worms and maggot beasts) are carrion-eating larvae living in plagued areas of Azeroth. They are especially living in the scourged zones of Lordaeron.