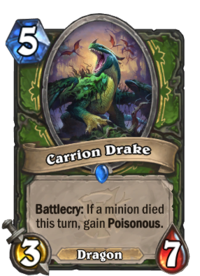 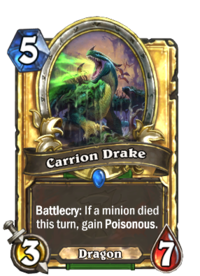 Battlecry: If a minion died this turn, gain Poisonous.

Carrion Drake is a rare hunter minion card, from the The Witchwood set.

Carrion Drake is a very strong minion, for the fact that he has the Poisonous effect after a minion died on your turn. While playing this card, you need to make sure you have at least 2 minions on the board. One for your opponent, and one of your own. When you will trade into a minion, Carrion Drake will be a minion that your opponent will have to remove, since Poisonous is a very strong effect in a Control matchup.

This minion's high health makes it ideal to combo with Stormhammer.

The Carrion Drake appears to be a member of the green dragonflight. However, as green dragons tend to be among the more kind and understanding of Azeroth's dragons, this dragon's personality seems unusual and has more in common with the dragonkin affected by the Emerald Nightmare. The Nightmare corrupts dragonkin into agents of destruction and chaos.