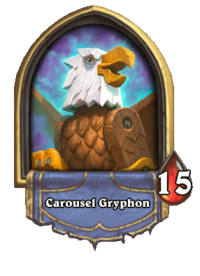 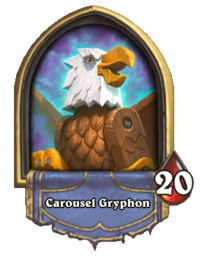 Round and round your minions go...

Carousel Gryphon is a boss that can be encountered during The Dalaran Heist.

The Carousel Gryphon changes the position of all minions on boards by exchanges placed with their rightmost side. This, in turn, lets it take your minions and leave you with his. To counter this, make sure he always takes your least wanted minions as it's hero power can only be used once at the end of its turn and each minion only moves once. And it's easier to do with the cards or hero powers that generate small minions (Totemic Call, Reinforce, Primalfin Totem, Rafaam's Scheme etc.)

If you have any direct damage (spells, weapons, hero power) try to implement this to the maximum. It rids you from playing the minions which will be on the enemy board later. Also boss tries not to play big minions if he can't place them on the left from his weakest minion.

Madame Lazul
De carousel from de Darkmoon Faire is in town. It is a thing of evil, so be gentle with it.

Kriziki
This form of amusement sickens me.

Captain Eudora
I want a refund.