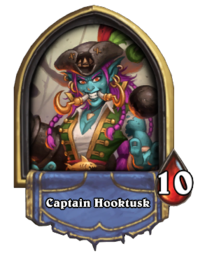 Those who say her cheating goes overboard soon follow suit.

For the minion card of the same name, see Captain Hooktusk

Captain Hooktusk is a boss that can be encountered during the Rumble Run, if the player has not choosen one of the Rogue Shrines. 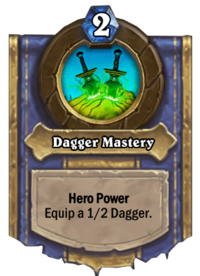 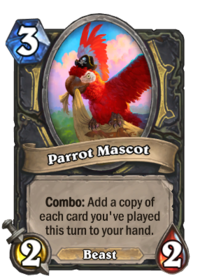 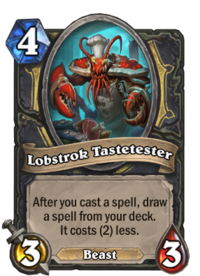 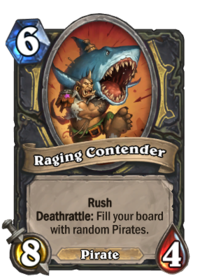 Captain Hooktusk
Greetings - I t'ink we're gonna get along swimmingly.
Well Played - Eh, de crowd liked it.
Thanks - No worries, pay it forward.
Threaten - Bwa-haha! Oh... you were serious.
Oops - We all make mistakes. Some worse than others.
Wow - Now dat's a feat.
Sorry - No need to apologize.

Captain Hooktusk
It was just a distraction anyways.
Sink me!
You think dat's a good idea?

Captain Hooktusk
Ah, we're back in de game boys.
It's back already! Good luck.
What goes around... comes back.

Captain Hooktusk
Hook, line, and sinker.
No shrine is too sacred to defile.
Watch your back as you pick up de pieces.
Water against fire. An unfortunate matchup for you. (vs. Mage)

De jig is up!
It's time for an ambush!
They're onto us boys!

I'll take dat.
You play with these cards? Seriously?

Are you seeing double?
I'll just take another one...
Turns out I AM a two-timer.

A backstabber if ever I saw one.
Ah, me trusty crew! Watch out for dat one.
We're in good company.

I make my own rules.
Time to do a little shopping.

Captain Hooktusk
Down with de ship...

Captain Hooktusk
De odds were against you. I made sure of it.

Hooktusk is unique to Hearthstone. An elusive troll pirate and notorious cheater,[1] she serves as the champion of Gral's Sharks, the swashbuckling rogue team in Rastakhan's Rumble.

This charming and flashy pirate has come ashore to claim her share of glory in the Rumble, and she’ll lie, cheat, and steal to get it! Rogues who choose Captain Hooktusk as their champion will find that she rarely goes anywhere without her loyal crew.[2]

Gral was not a subtle Loa. When he wanted something, he went for it, full force. He was a natural match for Captain Hooktusk and the bloodthirsty band of buccaneers she called a Rumble team. When it came to the Sharks, ruthless was a euphemism. They never played by the rules. Sometimes they’d even make up rules just for the pleasure of breaking them. Just before they broke their opponents.[3]

Against Bottled Terror, just go for face. Don't help Hooktusk buff her own minions. Against Treasure from Below, quickly destroy the 2-Health Shrine and either control or go for face, depending on your deck. If it is Challenge 5 and you are controlling, watch out for Raging Contender.

Against Pirate's Mark, since most of Hooktusk's spells are damaging, just make sure to have a supply of spells at hand, and don't trust your minions. If you somehow obtain an Elusive minion, it will be very valuable.