Captain Hooktusk is a hero that the player can pick in the Battlegrounds game mode. 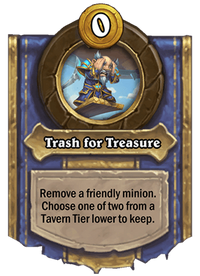 Captain Hooktusk's hero power is inconsistent, and its nature could be hard to master.

Using this hero power at tier 1 minions may be useful in "buffing" in early phase, by replacing 1/1 minions like Tabby Cat with potentiall more powerful minions. Using it at a battlecry minion would prevent the problem of buffs on minions being wasted.

Since it is not guaranteed to give any buff by using the power, you should be prepared it would do nothing in the early game, nevertheless you should use this hero power whenever possible, therefore you should find buffing minions. The hero power is more powerful when used at higher tier minions, but only if you survive up to that.

After using this hero power, the new minion is placed in your hand, which allows playing other buffing minions before placing the new minion. It is also a way to move minions away from board in recruit phase.