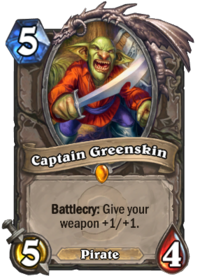 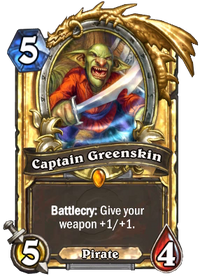 He was this close to piloting a massive juggernaut into Stormwind Harbor. If it weren't for those pesky kids!

Captain Greenskin is a legendary neutral minion card, from the Classic set.

Captain Greenskin's Battlecry is surprisingly powerful and useful in any deck focused on weapons, and strongly encourages waiting to play him until you have a suitable weapon equipped.

Many weapons are carefully balanced so as not to be overpowering in their natural state, particularly when it comes to Durability. Greenskin's effect allows these weapons to be used one additional time, granting extra board clear and often providing a subtle but impressive amount of Card advantage via economy by allowing a single weapon card to clear three or four or even more minions on its own.

Some weapons become even more powerful - using Greenskin's Battlecry on a 7-Attack Gorehowl will allow the weapon to gain 2 extra uses, and deal up to 16 extra damage in total - an extra 8 damage to the enemy hero, and an extra 1 damage for each of 8 attacks against minions. An Assassin's Blade with Deadly Poison and Greenskin's effect offers a total of 30 damage on its own - matching a Hero's starting life total. Kingsbane retains the +1/+1, which lets it become stronger early on before you whole deck is drawn. Atiesh allows an additional spell to summon another minion.

Caution must be taken on using Greenskin with a Deathrattle weapon equipped - Death's Bite, Powermace, Charged Hammer, and Hammer of Twilight are often played for their powerful deathrattles more so than their attack capability alone, and Greenskin's effect will delay the rattle for an extra turn.

Given his otherwise underwhelming stats, Greenskin is likely a poor choice for decks which do not feature weapons.

This card is the only reliable way a rogue can increase the durability of their weapons.

Summon
Drink up, me hearties!