Captain Eudora is a hero that the player can pick in the Battlegrounds game mode. 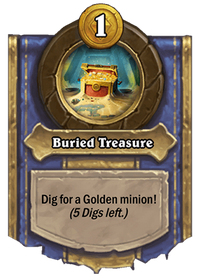 Captain Eudora's Hero Power allows you to get a random Golden minion from your current Tavern Tier or lower every five times it is used, complete with the standard reward of Discovering a minion of the next Tavern Tier. The massive power spike that Buried Treasure represents means that players should aim to use the Hero Power every round, and the Golden minions can be used to give direction to your composition. It is even worth using the Hero Power on turn 1, even if you have to forgo keeping a minion on the field to do so (although Murloc Tidehunter and Alleycat should be played and the token sold to use the Hero Power, while Deck Swabbie should be played and sold to use its Battlecry).

As a consistent source of Golden minions, Eudora works very well with Goldgrubber.