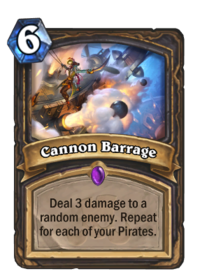 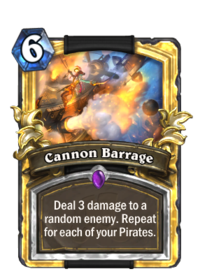 Deal 3 damage to a random enemy. Repeat for each of your Pirates.

Why fire your cannons strategically when you can fire them all at once?

Cannon Barrage is an epic rogue spell card, from the Rastakhan's Rumble set.

Cannon Barrage can be obtained through Rastakhan's Rumble card packs, or through crafting.

Cannon Barrage is a very potent finisher in Pirate decks, capable of dealing tons of damage while your board is swarming with pirates, which Pirate Rogue decks are easily capable of accomplishing with cards like Sharkfin Fan and Captain Hooktusk. Unless facing a deck with extremely heavy board removal options, your board will find some point for Cannon Barrage to deal good damage. With Preparation, it becomes even more flexible to use.

If your opponent's field is quite empty, an OTK can be set up:

Have 6 1-cost Pirates from your hand. This is achievable via returning Bloodsail Flybooter to hand (and you can also run The Caverns Below in the meantime). You must also have Archmage Vargoth and this in your hand. Then, reduce the cost of all cards by 1 using Emperor Thaurissan. Clear your field, play the 6 Pirates and Vargoth, then cast Cannon Barrage. This will deal 18 damage twice. The downside is that 9 cards are needed, and 6 cards need set-up to be obtained.

Cannon Barrage appears to be based on Cannonball Barrage, a removed level 90 talent for Outlaw rogues in World of Warcraft that caused a ghostly ship crew to barrage a target area over 1.8 seconds, damaging and slowing enemies.