Call in the Finishers

From Hearthstone Wiki
Jump to: navigation, search
Call in the Finishers
Regular 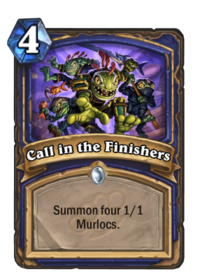 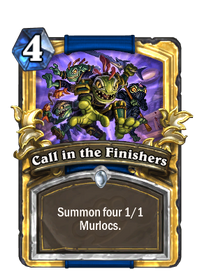 When you really need a job done… but you don't really care if it gets done right.

Call in the Finishers is a common shaman spell card, from the Mean Streets of Gadgetzan set.

Call in the Finishers can be obtained through Mean Streets of Gadgetzan card packs, or through crafting. 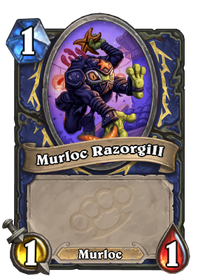 Four 1/1s for 4 Mana may not seem like much, but in a Murloc deck, this card is excellent way to fill your board with just a single card, which can then be followed up with other Murloc synergy cards like Murloc Warleader. It also gives your Murloc Tidecaller a large Attack boost once played.

The card also can be followed up with area buffs such as Flametongue Totem, Dire Wolf Alpha, and Bloodlust, turning your 1/1s into an efficient source of damage.

This card has incredible synergy with Unite the Murlocs, completing 4/10 of the Quest with one card.

Combining this card with Evolve gives you four random 2-mana minions for just 5 mana. Despite the risk of one of them turning into a Doomsayer, this usually provides excellent value.

Judging by their similar choice of attire and weaponry, this group of murlocs appears to be among the ones trained in the ancient art of "finjitsu" by Finja, the Flying Star or one of his associates.