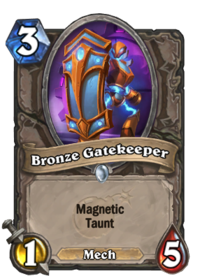 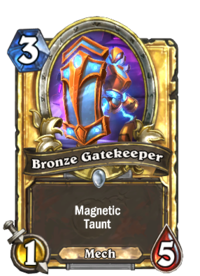 "You have my shield! And the rest of me too."

Bronze Gatekeeper is a common neutral minion card, from The Boomsday Project set.

Bronze Gatekeeper is a cheap neutral Taunt with rather underwhelming stats when compared to minions such as Tar Creeper, Druid of the Swarm, and Phantom Militia. However, the Magnetic ability allows you to give a Mech minion Taunt and a great Health boost, which can shut out an opponent when played at the right time. If played on curve with Upgradeable Framebot, for example, you are left with a great 2/10 minion which can shut out many aggressive decks. It also has great utility in the late game, letting you make great trades directly from your hand.