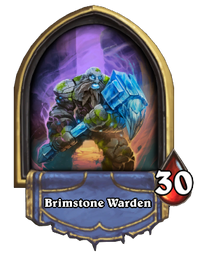 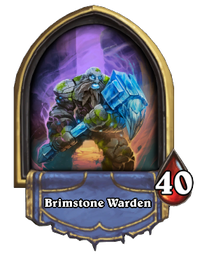 At all costs, stop him from waking the ancient guardians...

Brimstone Warden is a boss that can be encountered during the Dungeon Run. 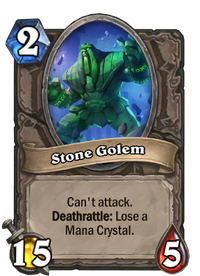 Brimstone Warden begins with 4 Stone Golems in play. If he makes it to 5 mana crystals, he will use his hero power to silence them and easily eliminate the player. Since killing a golem removes one of his mana crystals, the player should destroy them at a rate to keep him from reaching five mana. A quick deck may be able to deal enough damage to Brimstone before he reaches five mana; the typical deck will mix dealing quick damage and controlling the golem/mana situation.

The lion's share of Brimstone's deck is additional golems. The golems cost 2 mana; on turns where he has enough mana he will tend to play a golem.

Since he cannot go below zero crystals, killing golems in excess of Brimstone's current mana level is unnecessary and wasteful; if using mass removal, it is usually better to wait until he has as much mana as he will lose before wiping his board (e.g., if Brimstone has 3 golems, wait to play Shadowreaper Anduin until he has 3 mana, if possible).

THE CANDLE is a particularly useful spell in this encounter, as it can kill or nearly kill all opposing golems and shuffle itself back into the deck to be reused. This also frees up the player's minions to focus on damaging Brimstone.

King Togwaggle
Shh! Statues be having eyes, like blinky-ones. No wakey!

Brimstone Warden
Begone. There is nothing here for you.

Brimstone Warden
I will not be deterred.

Brimstone Warden
It is a matter of time.
You prolong the inevitable.
My will is stone...
I... must protect... the sanctum...
You desecrate this place.

Brimstone Warden
AWAKEN!
AWAKEN! ...Oh. (if there are no Stone Golems on the board)

Brimstone Warden
Why... thank you.

Brimstone Warden
The sanctum is secure.

Brimstone Warden is unique to hearthstone. He appears to be a guard in charge of waking the Stone Golems.

From Wowpedia: Earthen (sometimes referred to as early dwarves)are stony proto-beings, similar to dwarves, that were created by the Keepers to help shape the subterranean regions of the world of Azeroth. Earthen have at least two physical forms: those primarily seen in Uldaman, and those primarily seen in Ulduar. The history of the earthen and their transformation into dwarves can be found recorded in the Discs of Norgannon in Uldaman. Further history about research conducted in Northrend can be found in Ulduar.