Brawl Block: Year of the Mammoth 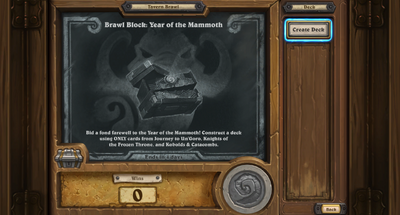 "Bid a fond farewall to the Year of the Mammoth! Construct a deck using ONLY cards from Journey to Un'Goro, Knights of the Frozen Throne, and Kobolds & Catacombs."

Brawl Block: Year of the Mammoth is a Tavern Brawl. It debuted on March 27, 2019. For exact times, see the schedule.

This Tavern Brawl sees players doing battle with custom decks composed solely of cards from the Journey to Un'Goro, Knights of the Frozen Throne and Kobolds & Catacombs sets.

Synergies from the Year of the Mammoth include Elementals, Beasts, Recruit minions, and big cards with Spiteful Summoner. These are good bases to build decks around. The original nine Hero cards are also a major focus, and are easy to fit into mostly any deck.

One notable deck is Deathrattle Hunter, which has almost all of its key components coming from this year and enough alternatives to complete the list.