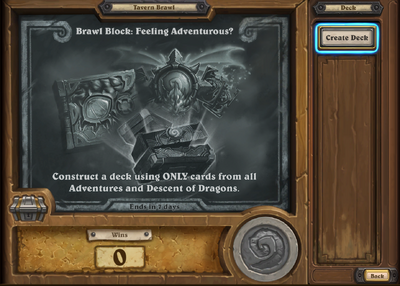 "Construct a deck using ONLY cards from all Adventures and Descent of Dragons."

Brawl Block: Feeling Adventurous? is a Tavern Brawl. It made its debut on April 29th, 2020.

This Tavern Brawl sees players doing battle with custom decks that can be build only using the Curse of Naxxramas, Blackrock Mountain, The League of Explorers, One Night in Karazhan, Descent of Dragons, and Galakrond's Awakening sets.

Thanks to the inclusion of the Dragon-based Blackrock, Descent of Dragons, and Galakrond's Awakening sets (as well as some Dragon support in Karazhan), Dragon decks are the way to go. Hunter in particular has access to multiple strong tempo cards, although Priest and Paladin have good options as well. With the full Galakrond package available for play, Priest, Warlock, Warrior, Rogue, and Shaman have an easy deck option. The existence of Reno Jackson and Dragonqueen Alexstrasza allows for a Highlander build.

Due to a complete lack of any class cards, Demon Hunter is not recommended.