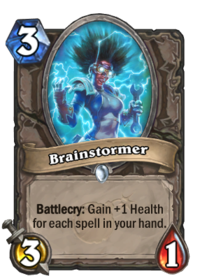 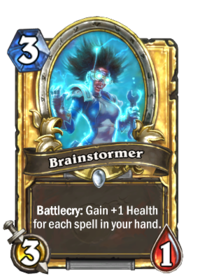 Battlecry: Gain +1 Health for each spell in your hand.

Brainstormer is a common neutral minion card, from The Boomsday Project set.

In order for this card's stats to be worth the cost, it must be played with at least 3 spells in hand. However, most decks with an abundance of spells veer toward control and thus have little use for a 3-cost minion with no other effects. It's also generally considered worse than Twilight Drake, which costs 1 more mana but has 1 more attack, the Dragon type, and the ability to gain health for all cards in your hand.