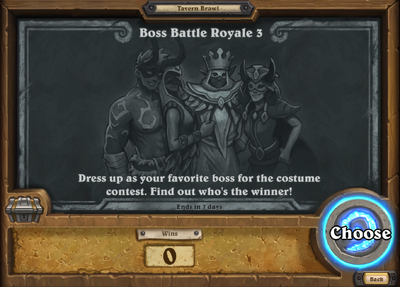 "Dress up as your favourite boss for the costume contest. Find out who's the winner!"

This Tavern Brawl sees players taking on the form of various bosses from previously released adventures and missions. Unlike previous Boss Battle Royales, players chose a boss directly instead of each boss being tied to a specific class.

The bosses, Hero Powers and related cards for each hero are listed in the following table. Full deck lists can be found in the sections below.