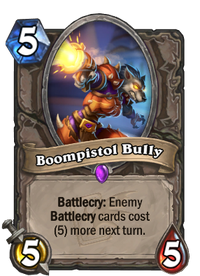 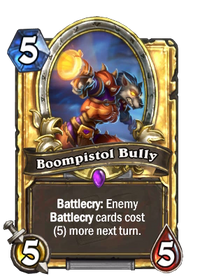 Boompistol Bully is an epic neutral minion card, from the Galakrond's Awakening set.

Two copies of regular Boompistol Bully are obtained by defeating The Dragonflights in Galakrond's Awakening's Chapter 3 of E.V.I.L. campaign.

It's important to read when your opponent is about to play an important Battlecry. If they've kept a specific card in their hand for a long time, there's a good chance it's a card with a reactive effect. Boompistol Bully can also be used with Chaos Gazer to most likely discard a card from your opponent's hand.

Do be cautious when playing this card while ahead. Unlike Loatheb, it does not protect your board from Area of effect spells, possibly giving your opponent the perfect opportunity to waste your 5-mana play and recover tempo.

Summon
Nobody moves, and nobody gets hurt.
Attack
Move and you're dead!