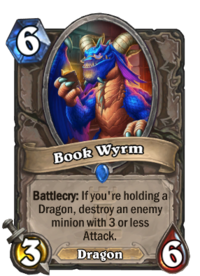 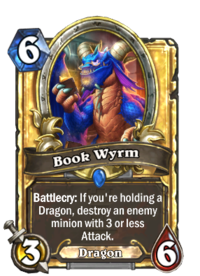 Battlecry: If you're holding a Dragon, destroy an enemy minion with 3 Attack or less.

His favorites are classic tragedies like "The Hobbit" and "Grendel".

Book Wyrm is a rare neutral minion card, from the One Night in Karazhan set.

Two copies of regular Book Wyrm are obtained by defeating Netherspite, the second boss in One Night in Karazhan's fourth and final wing, The Spire.

As a Wild format card, both regular and golden versions of Book Wyrm can also be crafted for the following amounts:

This minion draws many similarities with Stampeding Kodo, trading below average stats for cost for a powerful source of removal. However, Book Wyrm allows you to target specific minions instead of a random target, thus avoiding the Kodo's problem of triggering disadvantageous Deathrattles, and has a wider range of applicable minions due to the increased Attack range of 3, but requires you to have another Dragon in your hand. For this reason, Book Wyrm largely only works in a deck dedicated to other Dragons, compared to the Kodo's ability to be added anywhere.

Paladin Dragon decks can make the best use of this minion. Similar to the Kodo, Book Wyrm can synergize with Aldor Peacekeeper and Humility to remove an enemy minion regardless of how much Attack it originally had, while Dragon Consort can help a player get around Book Wyrm's otherwise prohibitive cost.

A wyrm is a dragon that has reached senior age, typically at about 500 years. This explains the dragon's reading glasses and curmudgeonly attitude.

This blue dragon is clearly a fan of literature, and may be a visiting member of the Blue Dragonflight, researching magical matters at the tower. It is original to Hearthstone.