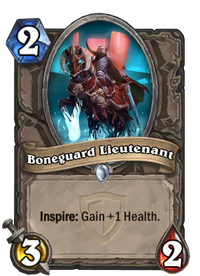 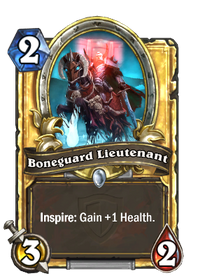 Boneguard Lieutenant is a common neutral minion card, from the Grand Tournament set.

Boneguard Lieutenant can be obtained through The Grand Tournament card packs, or through crafting.

Boneguard Lieutenant is a great early game minion in Inspire decks. If not dealt with early, he can gain substantial Health and be really hard to take down later on.

Summon
Greetings from beyond the grave.
Attack
You face death!

The cinematic for The Grand Tournament shows members of the Argent Crusade prepared for battle with the Lieutenant, but the death knight's intentions are not entirely clear. He may be some remnant of the Lich King's forces, come to assault the tournament attendees, or he may have been liberated from the Lich King's service, and be attending for his own reasons.