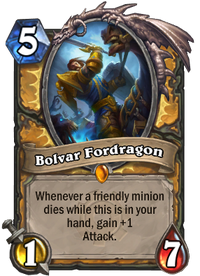 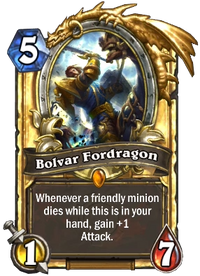 Whenever a friendly minion dies while this is in your hand, gain +1 Attack.

Spoiler alert: Bolvar gets melted and then sits on an ice throne and everyone forgets about him.

For the minion card from the Knights of the Frozen Throne set, see Bolvar, Fireblood.

Bolvar Fordragon is a legendary paladin minion card, from the Goblins vs Gnomes set.

Bolvar Fordragon can be obtained through Goblins vs Gnomes card packs, or through crafting. 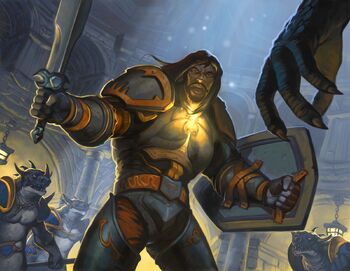 Bolvar, paladin of the Alliance

Bolvar is a powerful card, with the potential to provide a sturdy and extremely powerful minion for a very reasonable cost. His main value lies in synergy with the death of numerous friendly minions. This makes him ideal for use in decks with a focus on small minions, and for use with the paladin hero power Reinforce, which can provide an endless stream of 1/1s. Cards which generate multiple minions, such as Haunted Creeper, also offer excellent synergy. However, Bolvar only benefits from deaths while he is in the player's hand, so the player cannot rely upon a late draw of Bolvar to compensate for heavy losses in the game up to that point.

While a potentially massive presence on the battlefield, Bolvar has an acute weakness: his effect is provided in the form of a buff, making him vulnerable to Silence. Opponents are well-advised to keep a Silence or other removal such as Destroy or Transform effects in store for his arrival, especially if the opponent seems all too willing to sacrifice their weaker minions. Bolvar can be drawn by Crystology, letting you begin using his effect earlier. 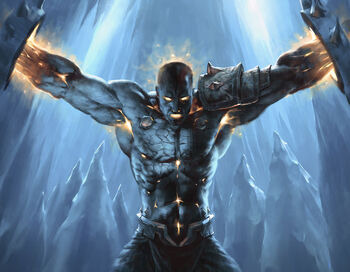 Bolvar, prisoner of the Lich King

Attack
You will pay! 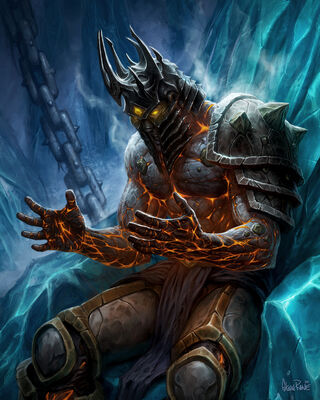 Bolvar as the new Lich King

"After suffering betrayal at the doorstep of his nemesis, a brave paladin was reborn in the searing heat of enchanted dragon flames. No longer fit to dwell among the living, alone he shall endure as the steward of a misbegotten throng."
—Jailor of the Damned

Highlord Bolvar Fordragon was a venerated paladin of the Alliance and served as the Regent of Stormwind following the disappearance of King Varian Wrynn. Upon Varian's return, Bolvar was named the commander of the Alliance forces sent to take the battle to the Scourge in Northrend. After the treachery of Grand Apothecary Putress at the Battle of Angrathar the Wrathgate, Bolvar was killed by the Forsaken Blight and reanimated by the flames of the red dragonflight.

Bolvar's body was altered by the dragons' flame, and was taken by the Scourge into Icecrown Citadel, where he was tortured by the Lich King in an attempt to bend him to his will. However, the noble spirit of Bolvar resisted the Lich King's depravations. After the death of Arthas Menethil, the mortal host of the Lich King, Bolvar demanded that Tirion Fordring place the Helm of Domination, containing all of the powers of the Scourge, on Bolvar's head so that he would forever be the jailer of the damned - imprisoning the Lich King within the Frozen Throne once more and containing the threat of the Scourge.