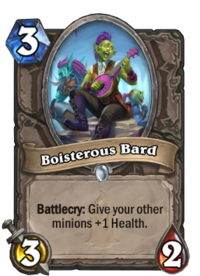 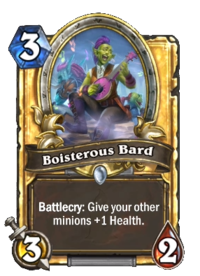 Battlecry: Give your other minions +1 Health.

As a kid, she fought with rocks. Now she fights with ROCK!

Boisterous Bard is a common neutral minion card, from the Kobolds & Catacombs set.

Boisterous Bard can be obtained through Kobolds & Catacombs card packs purchased online from the Battle.net shop, or through crafting.