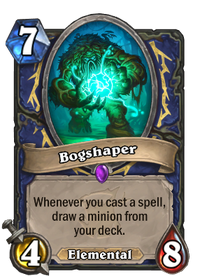 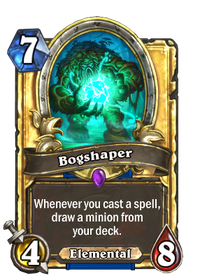 Whenever you cast a spell, draw a minion from your deck.

The tricky part is getting them to HOLD their shape.

Bogshaper is an epic shaman minion card, from the The Witchwood set.

Bogshaper can be obtained through The Witchwood card packs, or through crafting.

Bogshaper can be used as an extremely powerful draw engine when combined with the multitude of cheap shaman spells, such as Earth Shock, Unstable Evolution, Ancestral healing and Zap!. Its ability to draw only minions is exceptionally useful when drawing for a minion based combo such as a deck that uses Shudderwock. Because Bogshaper only draws minions it is not a risk to keep him on the board like Gadgetzan Auctioneer who can quickly fatigue you, because once you have drawn the last minion in the deck he will no longer draw cards.

Bogshaper has the elemental tag and it can be used in a deck that relies on elemental synergy to draw further elementals, or Bogshaper can be drawn from the deck with Sandbinder.