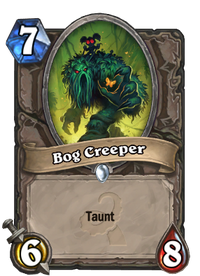 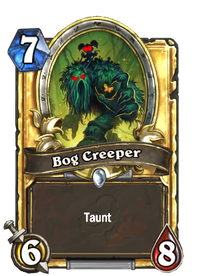 Bog Creeper is a common neutral minion card, from the Whispers of the Old Gods set.

Bog Creeper can be obtained through Whispers of the Old Gods card packs, or through crafting.

This minion is one of the strongest neutral Taunt minions in the game. It's highly advised to pick this in Arena, where there are hardly any cards to remove Bog Creeper, forcing the opponent to trade their minions.

This card competes with Furious Ettin, which has a similar statline. It compares somewhat unfavourably to Evasive Drakonid, which has slightly worse stats but gains Elusive and is a Dragon.

This is the corrupted version of Fen Creeper. It appears that the unlucky gnome who inadvertently used the top of the Fen Creeper's head as a fishing spot has also been corrupted and has now gained control of the creeper. The gnome could be the Gnome Warlock Nemsy Necrofizzle, given the matching silhouette and red goggles, as well as N'Zoth's opening remark v.s. Nemsy.