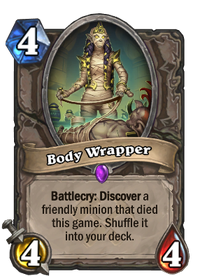 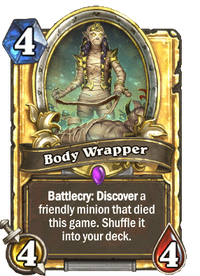 Battlecry: Discover a friendly minion that died this game. Shuffle it into your deck.

She uses pickle slices for the eyes. Keeps them well-preserved.

Body Wrapper is an epic neutral minion card, from the Saviors of Uldum set.

Body Wrapper allows you to revive a minion that has been destroyed, but instead of being played right away like Eternal Servitude, it goes into your deck. This makes it unreliable as a resurrection effect, but can allow you to reuse a strong Battlecry. Body Wrapper can also be useful for legendary minions or high cost minions later in the game.

In arena, it may have a use as you can recycle a well-statted minion for a second chance.

Summon
I believe in second chances.
Attack
Wrap it up!