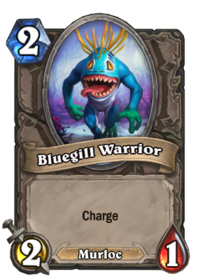 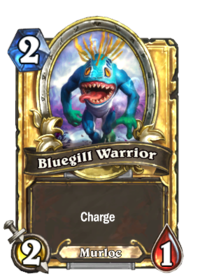 Bluegill Warrior is a neutral minion card, from the Basic set.

Two copies of Bluegill Warrior are automatically included in all players' collections upon unlocking the paladin class.

Two Golden copies of Bluegill Warrior are a reward for raising a paladin to levels 53 and 54.

Bluegill Warrior is uncraftable and cannot be crafted or disenchanted.

Bluegill Warrior is essentially a Murloc Raider with Charge, for a cost of 1 additional mana. The Murlocs' strength mostly comes from synergy with other Murlocs, so if you are going to use it outside of a Murloc deck you will lose a significant part of its potential value. By itself it is 2 points of instant directed damage for 2 mana. If the Bluegill Warrior removes an enemy minion before dying, this can usually be considered a fair trade, and if the Bluegill Warrior survives, it can be even more useful. However, its 1 Health means it is usually unlikely to survive too long without a Taunt or Health buff.

Overall, this card is most useful in Murloc decks (which usually include all available Murlocs anyway) and has limited value in other decks. However, it can serve as a handy form of almost guaranteed damage, especially for decks lacking in removal.

The Bluegill tribe is a tribe of murlocs found in the Wetlands. 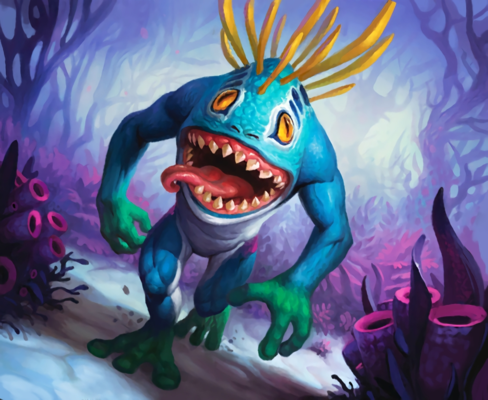