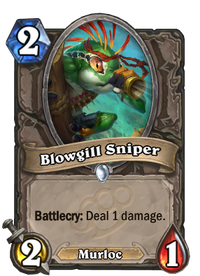 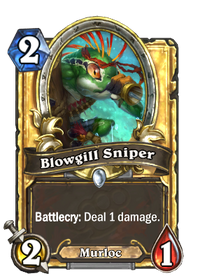 Imagine how much further his darts would go if he had lungs instead of gills!

Blowgill Sniper is a common neutral minion card, from the Mean Streets of Gadgetzan set.

Blowgill Sniper can be obtained through Mean Streets of Gadgetzan card packs, or through crafting.

Blowgill Sniper's stats are subpar for the cost, but the 1 damage Battlecry is useful in trading with enemy minions, or simply direct damage. The Murloc tag also allows for synergy with other cards.

Compare and contrast to Elven Archer, which has no Murloc tag and 1 less Attack in exchange for costing 1 less mana.

According to Senior Game Designer Matt Place, "The 'Blowgill' are an ELITE mur-cenary faction. They used to be called the "Hit-Man-O-Wars" but the name didn't [stick]."[1] Designer He-Rim Woo comments, "The Blowgill Sniper comes from a clan of urban murlocs found only in Gadgetzan so far."[2]