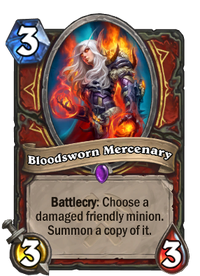 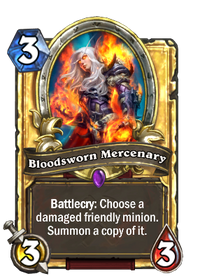 Battlecry: Choose a damaged friendly minion. Summon a copy of it.

You look really hurt. You could use a friend!

Bloodsworn Mercenary is an epic warrior minion card, from the Saviors of Uldum set.

Bloodsworn Mercenary is a strong enabler for aggressive decks. The ability to duplicate any damaged minion allows cards with Rush and Charge, like Kor'kron Elite and Militia Commander, to deal additional burst damage or bring down another minion. It can also simply be used to generate additional tempo, alongside this card's own 2/2 body.

Inner Rage makes an excellent enabler for this card's effect, letting you damage your own minions for free and giving an Attack buff that Bloodsworn Mercenary can duplicate; Cruel Taskmaster does the same, albeit for 2 mana. The copy also gives an extra draw with Battle Rage. Enrage minions like Amani Berserker and Raging Worgen naturally make great targets for duplication. Bloodsworn Mercenary can be extremely potent with Leeroy Jenkins and Inner Rage, particularly one buffed by Galakrond, the Unbreakable.

In Wild, a tick of Emperor Thaurissan allows this card to be played on the same turn as Grommash Hellscream and Inner Rage, dealing a catastrophic amount of burst damage.

Summon
Your flaws are your strength.
Attack
Punishment!