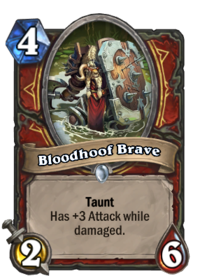 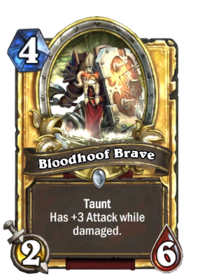 Taunt
Has +3 Attack while damaged.

He thought the set was called "Flippers of the Old Cods" and hungrily volunteered to be in it. He is definitely going to get his hearing checked.

Bloodhoof Brave is a common warrior minion card, from the Wild Event set.

For information about the original version of this card, see Bloodhoof Brave.

Two non-golden copies of Bloodhoof Brave are automatically included in all players' collections during these events:

Both non-golden and golden Bloodhoof Brave are uncraftable and cannot be crafted or disenchanted.