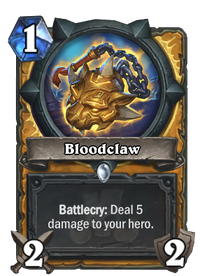 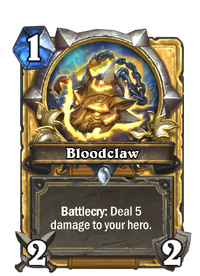 Bloodclaw is a common paladin weapon card, from the Rastakhan's Rumble set.

Bloodclaw can be obtained through Rastakhan's Rumble card packs, or through crafting.

This weapon is marginally stronger than most 1-mana weapons at the cost of high self-damage. In aggressive decks, the self-damage is not a huge drawback for the 1 extra Attack it has, which is very effective on the first few turns of the game. Bloodclaw is an option for early trades focused on specific targets at the cost of 5 health. Seal of Light is a great follow up. Healing 4 damage points, giving +2 extra damage for powerful early strikes.

Time Out! can be used before Bloodclaw for a double damage mitigation, plus preventing you from further damage.

Be careful with an active Brann Bronzebeard. Bloodclaw's damage is a Battlecry, and will be increased by related effects.