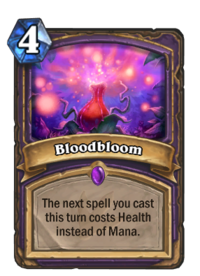 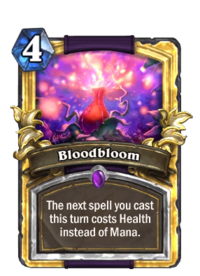 The next spell you cast this turn costs Health instead of Mana.

Bloodbloom is an epic warlock spell card, from the Journey to Un'Goro set.

Bloodbloom can be obtained through Journey to Un'Goro card packs, or through crafting.

Example: If you have both Bloodbloom and Cho'Gall's effects active, you pay Health instead of mana for the next spell you cast that turn, then the effect ends. You do not get to do it for two spells in a row, and you don't pay Health twice.[1][2]

This spell allows the casting player to immediately follow up with a spell with high mana cost, as early as turn 4 (or even turn 3 when combined with The Coin). The advantage that such an early start gives can offset the health loss to your Hero.

On turn 7, you can combine this with Violet Illusionist, allowing you to cast an expensive spell without paying the health penalty.

In the late game, provided you have the health to spare (or find a way to make your Hero immune), playing this while having Atiesh equipped can cause a devastating swing in the board state.