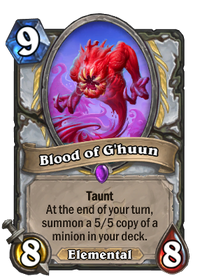 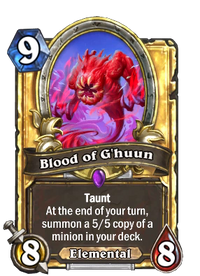 Taunt
At the end of your turn, summon a 5/5 copy of a minion in your deck.

An attempted cure becomes disease, blooming and thriving as rot and decay.

Blood of G'huun is a epic priest minion card, from the Madness at the Darkmoon Faire set.

Blood of G'huun is an extremely powerful card. It can be used as both a control "bomb" and a finisher for mid-range style decks. Expect only one use of Blood's end-of-turn ability; It is a massive target for cards like Polymorph, Shadow Word Death, or other targeted removal spells.

The appearance of Blood of G'huun is identical to Vectis.

Vectis is a boss in Uldir.

This connection is further reinforced by Vectis being called Blood of G'huun in the early Alpha for Battle for Azeroth.