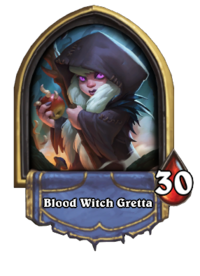 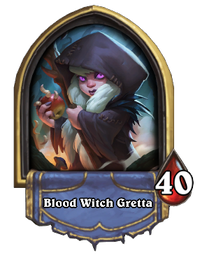 Magic is powerful in her grove... but it comes at a cost.

Blood Witch Gretta is a boss that can be encountered during the Monster Hunt.

Having barely any spell, you will need to survive an onslaught of spells. If you can build a board, you will win

Typically your deck would be light on spells but powerful cards like Call of the Wild can make for a very quick game.

If you can obtain a copy of Violet Illusionist then most Toki decks can do a better job than the boss can with infinite Mana. If Archmage Antonidas has be acquired then this boss is a walk in the park.

As with Toki, obtaining a copy of the bosses Violet Illusionist can end the game in a heartbeat. You can use your hero power to obtain copies of her Mirror Entity and hope she plays the right minion but a better way of obtaining it is through Gang Up which appears alot in card packs along the Monster Hunt. The passive treasure Cult of the Wolf is very useful here as anything you get is going to be castable right away most of the time.

Casts spell or her secret activates

Blood Witch Gretta
Toodaloo.
All are equal before my magic.

Blood Witch Gretta
Take a bite.
Tasty, no?
So fragile. So frail.

Blood Witch Gretta
There's no such thing as a free meal, dear.