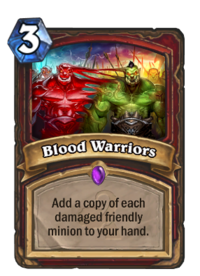 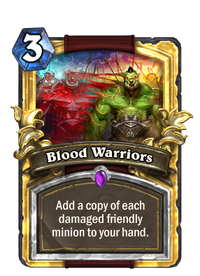 Add a copy of each damaged friendly minion to your hand.

They have an uneasy rivalry with the Blood Paladins.

Blood Warriors is an epic warrior spell card, from the Whispers of the Old Gods set.

Blood Warriors can be obtained through Whispers of the Old Gods card packs, or through crafting.

This card fits well with a deck themed around gaining benefits from AoE damage and damaging your own minions. Similar cards include Battle Rage and Rampage, as well as minions like Grim Patron, Armorsmith and Frothing Berserker.

Blood Warriors and Sudden Genesis are similar to one another such as producing copies of damage minions with sudden genesis making copies onto the battlefield while Blood Warriors makes copies into your hand.

Similarly, all these cards are rarity of epic cards.