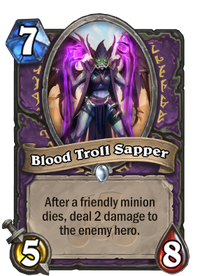 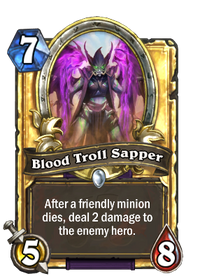 After a friendly minion dies, deal 2 damage to the enemy hero.

Main supplier of Blood Troll Syrup to the Intercontinental Hut of Funnel Cakes.

Blood Troll Sapper can be obtained through Rastakhan's Rumble card packs, or through crafting.

Blood Troll Sapper can be a good addition to a zoo deck by increasing the value of trades, and by generating damage that gets around taunts. Pairing with deathrattle effects and cards like Spirit of the Bat and Grim Rally can help maximize the benefits.

Having a relatively high health, it can also help provide a safety net for damage-based board clears like Volcano, Defile and Duskbreaker -- you will still lose your other minions, but Blood Troll Sapper is likely to either survive the damage altogether or die last. If you have six other minions on the board, it could mean the board clear cost your opponent 12 damage. An inattentive opponent might even lose outright, or unexpectedly put themselves within lethal for your next turn.

Summon
Who wants to play?
Attack
I see red!