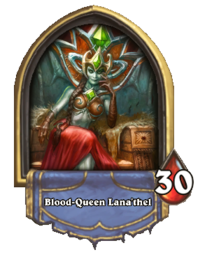 Beware the terrible bite of the vampiric Blood Queen!

For the card of the same name, see Blood-Queen Lana'thel. 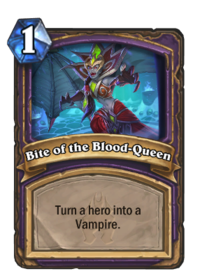 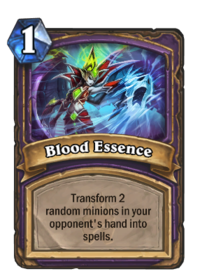 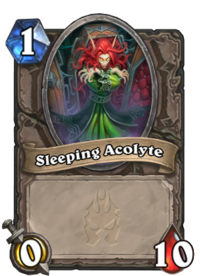 Each turn, if your Hero Power is not Vampiric Bite, Lana'thel will play Bite of the Blood-Queen to turn your Hero Power into it, starting from the very first turn, meaning that changing your Hero Power such as through Baku the Mooneater, Genn Greymane or Sir Finley of the Sands or other such cards are unlikely to retain the better Hero Power for more than a turn.

This whole fight is about your new hero power, +2/+2 for 0 mana is a huge boost, the only catch is that you are forced to use it each turn (unless there are no possible targets on the board) and each minion can only be affected by it once. Playing at least one minion each turn solves that problem, but be wary of her 2 Blood Essence spells, which turn 2 minions in your hand to spells.

Blood Queen runs 12 demons(+summoned imps) and 6 non-demons as well as 2 Imp-losions and 3 Demonwraths, so countering her with a demon-zoolock with addition of cards such as Light's Champion and Sacrificial Pact is one idea.

Additionally since you are going to be using hero power every turn any Inspire cards have a higher value here as well as Frost Giant and Poisoned Blade.

A card that will continuously generate minions each round such as Moroes or Hogger can be invaluble here, as long as the player can keep their health up for long enough before Lana'thel's spells and the Despicable Dreadlord can overwhelm the player. Moroes in particular can be incredibly powerful in this fight as of together with the fact that he is stealthed, the stewards that he spawns will often have a lower priority than the player itself and make for an excellent candidate to bite together with Moroes himself.

Blood-Queen Lana'thel's boss fight can be easily trivialized with Jade Druid or Pogo-Hopper Rogue decks, as you can quickly summon low-cost minions which increase in power with each summon, eventually becoming strong enough to overwhelm Lana'thel's forces. The Pogo-Hopper strategy is especially effective as Rogues can quickly shuffle more Pogo-Hoppers into their deck using Gang Up, Lab Recruiter and Togwaggle's Scheme, or replay the Pogo-Hoppers via Shadowstep or Daring Escape to give them an extra Battlecry buff or gain a better target to bite if you are running out of minions.

The Lich King
You seek to turn my own power against me? Do you know how many times I've ranked Legend?

The Lich King
Lana'thel!! There are TEETH MARKS in my CARDS! I told you to put them in SLEEVES!

Know my hunger!
You are too late. I am already lost! (cast by player)

It's getting too crowded in here.
Let's mix things up, hmm?
You didn't have plans for those, did you?

Blood-Queen Lana'thel
Why not feed on one of MY minions? They’re dormant... And delicious... and covered in gravy!

Blood-Queen Lana'thel
Be sure to spit out the poison when you're done. (biting a Poisonous minion)
Biting that HAD to hurt. (biting a Dinosaur)
Don't chip a tooth. (biting a Tortollan or Mech minion)
Ohhh you put your MOUTH on that? (biting an Ooze)

Blood-Queen Lana'thel
Are you forgetting something? The thirst burns in your veins!

Vampiric Bite on a Sleeping Acolyte

Blood-Queen Lana'thel
*scoff* You...!
The Lich King
This boss bites.

Oh I knew I liked you.

Blood-Queen Lana'thel
But we were getting along so well!
The Lich King
Lana'thel... It is fortunate you cannot lose stars at your rank.

The Lich King
Are you afraid to bite your own minions? This is Icecrown. Not NICEcrown!