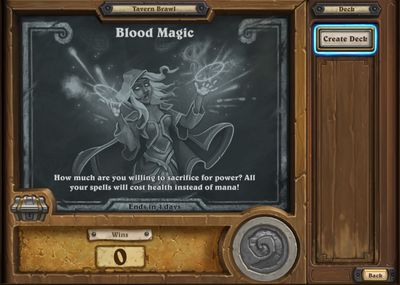 "How much are you willing to sacrifice for power? All your spells will cost health instead of mana!"

Blood Magic is a Tavern Brawl. It debuted on February 15, 2017. For exact times, see the schedule.

This Brawl sees players creating their own custom decks using any class. Each spell the player casts reduces their hero's Health and/or Armor by an amount equal to the card's mana cost, instead of expending mana. This effect is similar to that of Cho'gall's effect.

Because a player starts with 30 health and no spell costs more than 10 mana, multiple costly spells can be cast on the first turn. Given a favorable enough draw, a Mage may be able to inflict massive burst damage with multiple Pyroblasts, or a Hunter might play multiple Calls of the Wild, in a single early-game turn.

Cards that grant immunity, such as Violet Illusionist, are especially valuable, as their effect prevents spells from reducing the health of the hero and renders the spells effectively free.

Cards that increase the cost of enemy spells, such as Loatheb, will cause an opponent to take more damage from spells, deterring or possibly preventing them from casting. Note however that this advantage can be easily rendered null and void if the opponent plays or already has an immunity-granting minion as mentioned above.

Due to the burst-heavy nature of this Brawl, the ability to draw cards - ideally using a minion such as Coldlight Oracle - can help you draw into more Spells to finish off an opponent with. Also consider the usage of minions that provide Spell Damage.

The above characteristics strongly favor Mage decks in this Brawl, due to the inclusion of the aforementioned cards, as well as other class-specific minions and Spells, such as Animated Armor and Flamewaker.

Alternatively, a Paladin can play a deck comprising various draw, damage and buff spells, such as Hammer of Wrath, Lay on Hands and Blessed Champion. Buff spells can then be played on a minion with Charge (e.g. Stonetusk Boar or Patches the Pirate) for devastating burst damage, even to the extent of a one-turn kill. Even if the opponent survives, their resulting low health will then prevent them from mounting a counterattack with spells.

With the addition of Frozen Throne and Ultimate Infestation - druid can generate turn 1 one turn kill with a combination of card draw and charge minions.