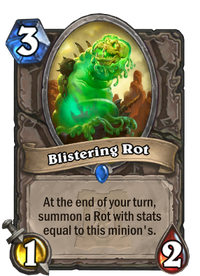 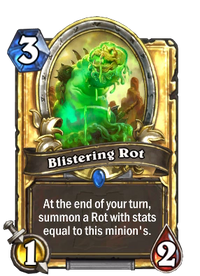 At the end of your turn, summon a Rot with stats equal to this minion's.

Known as 'Fel Gel' to the Illidari, it's excellent protection against harsh Draenic sunshine.

Blistering Rot is a rare neutral minion card, from the Ashes of Outland set. 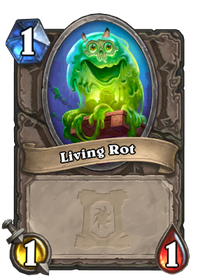 At the end of the first turn, Blistering Rot is identical to a 3 mana Echoing Ooze. However, if the minion survives, it will continue to summon Living Rots each turn. With even a small buff on the Blistering Rot, this can provide a large amount of value over time.

This minion is also similar to Shrieking Shroom. The Shroom has more highroll potential and doesn't rely on buff cards, but Blistering Rot provides more synergy.

Blistering Rots are oozes found in Hellfire Peninsula. They are spawned by Aggonar's fel-tainted life-energy.