Blessing of the Raven 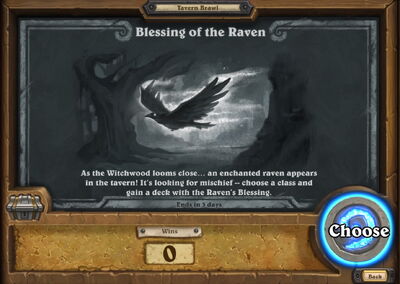 "As the Witchwood looms close... an enchanted raven appears in the tavern! It's looking for mischief -- choose a class and gain a deck with the Raven's Blessing."

Each player gets a random deck with random cards, just like Encounter at the Crossroads. At the start of the game, Blessing of the Raven is automatically played, granting all minions one of five effects through an enchantment (Charge, Lifesteal, Poisonous, Stealth or Windfury).

There is also a small chance for "super blessing" granting a minion Mega-Windfury. 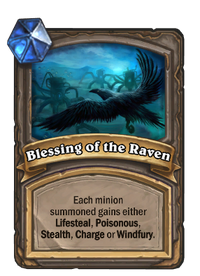 A random assortment of cards makes it harder to play combo-oriented classes like Shaman or Rogue. It's basically impossible for your deck to have any theme, so it's best to try for a tempo-style and play on curve as best as your draws allow.

The random abilities given to minions aren't impactful enough to constantly play around, but can impact how your game progresses (IE: getting lots of Charge effects allows you to play more aggressively). One notable exception is minions like Ravaging Ghoul and Animated Berserker. Be careful of your ordering when playing minions like these, because they can get Poisonous, potentially killing your own minions off.

Turn 1
The Innkeeper: Look! It seems a harbinger of the Year of the Raven has arrived!

Turn 2
The Innkeeper: The Year of the Raven is a wee bit, creepier than the rest.

Turn 3
The Innkeeper: The Year of the Raven gives way to some dark transformations.