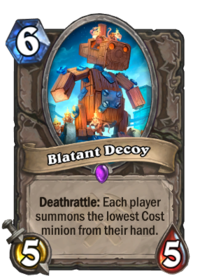 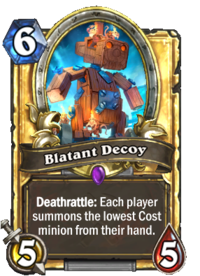 Deathrattle: Each player summons the lowest Cost minion from their hand.

"Hah! You is being tricked by ME! Togwaggle!"

Blatant Decoy is an epic neutral minion card, from the Saviors of Uldum set.

Blatant Decoy is best used in a deck that runs only big minions, such as Duel! Paladin and Darkest Hour Warlock decks. It acts as both a card that can put a higher cost minion on board cheaper and earlier and as a stinky Deathrattle minion.