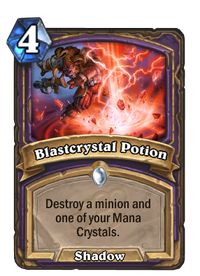 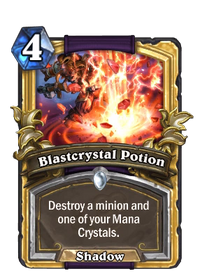 Destroy a minion and one of your Mana Crystals.

There's a fine line between "potion" and "grenade". Wait. Actually, there's not.

Blastcrystal Potion is a common warlock spell card, from the Mean Streets of Gadgetzan set.

Blastcrystal Potion can be obtained through Mean Streets of Gadgetzan card packs, or through crafting.

While not looking strong at first, it should be noted that when played at 10 mana you will regain the mana crystal next turn. In the end game, this is effectively a destroy effect without down side. However, even in the mid game there are situations where the tempo loss of sacrificing a mana crystal is an acceptable trade-off for removing a problematic minion.

Another thing to be noted is that this card's mana cost of 4 fits warlock's mana curve nicely since for warlock there are multiple good 6 mana cards, which when used with 4 mana cards allow you to efficiently use all of your available mana after turn 10. Examples of these 6 mana cards include Kabal Trafficker, Siphon Soul, as well as Reno Jackson and Sylvanas Windrunner.