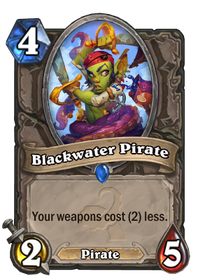 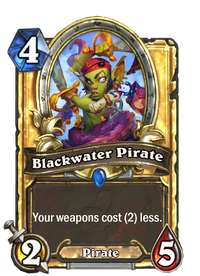 "Look, they fell off the back of a ship, do you want them or not? I have a meeting with Y'Shaarj in like ten minutes."

Blackwater Pirate is a rare neutral minion card, from the Whispers of the Old Gods set.

Blackwater Pirate can be obtained through Whispers of the Old Gods card packs, or through crafting.

This card is obviously only desirable in decks that have weapons. And because of its low stats but relatively high cost, it's best to equip the weapon the same turn you summon the Pirate, since the opponent may remove it before your next turn. Blackwater Pirate is best played in a deck with many weapons, ensuring it is available when needed.

Playing a weapon card with a cost of at least 2 while Blackwater Pirate is on the board effectively recoups 2 mana from her otherwise high summoning cost, making this card reasonably efficient even if only a single weapon is played before she is removed, providing a 2/5 for 2 mana. If the player is able to keep the Blackwater Pirate alive long enough to equip additional weapons, the card will quickly become highly efficient.

Summon
I sail the slimy deeps.

The Blackwater Raiders are a group of privateers and pirates operating in Booty Bay and closely affiliated with the Steamwheedle Cartel. They are led by Baron Revilgaz.

The goblin artwork on this card is consistent with the goblin-heavy demographic of Booty Bay and the Steamwheedle Cartel. Unlike the Bloodsail Cultist, who has seemingly succumbed to the Old Gods' malign influence, the Blackwater Pirate appears to be resisting and fighting against the eldritch horrors.