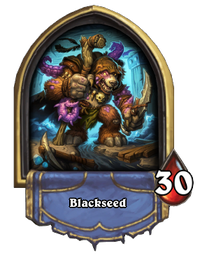 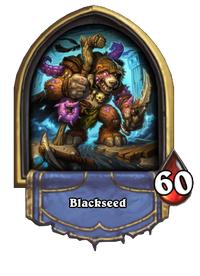 Blackseed is a boss that can be encountered during the Dungeon Run.

Despite his strategy resembling an Evolve Shaman deck, Blackseed uses a Token Druid deck, fielding plenty of creatures so that he almost always has something to use with his Hero Power.

Much like how one combats Evolve Shaman decks, do everything in your power to keep his board empty so that he has very few targets to use his Hero Power on. Keep some board clears handy around turn 4 to 5 as that's when he begins to use Saronite Chain Gang and Doppelgangster. If you're on the higher levels, where his Hero Power isn't free, his AI doesn't plan ahead enough reserve mana to immediately use his Hero Power on the tokens, typically giving you a free turn to pick them off before he starts evolving them.

In case you can't clear enough of his minions in time, the only thing left is to just hope that he rolls poorly with the evolving effects.

Beware using Tad's Pole, which can actually harm you more than help. Most of Blackseed's cards have directly harmful effects when summoned instead of played, and those that don't are either often useless or incredibly subpar.

Blackseed
You are just another... of the voices...

Blackseed
You do not see the shadows... but they see you.
Who is the monster here?
Things are not as they seem...
These caverns go deep.
It calls out...

Blackseed
You are touched by darkness!

Blackseed
There is another, far below...

Blackseed is unique to hearthstone. He appears to be corrupted by an Old God.